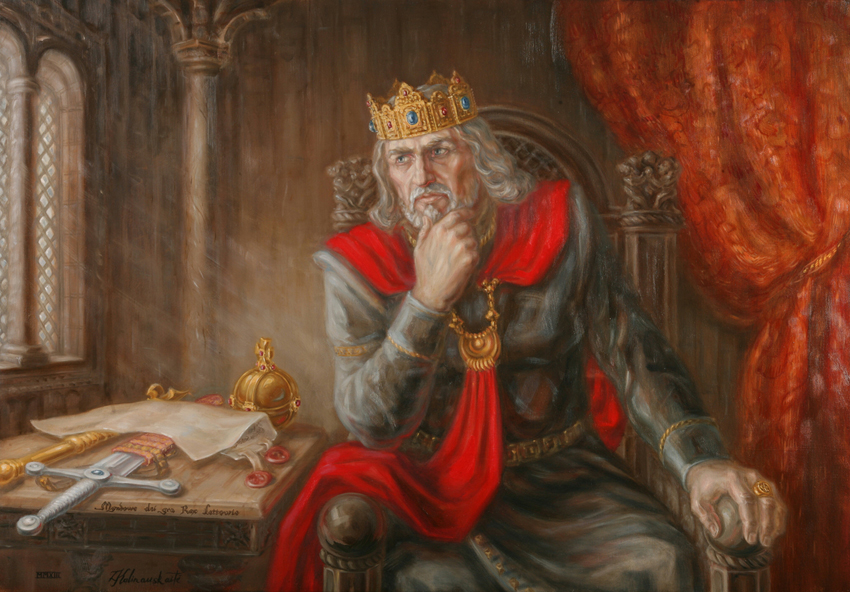 The State day of Lithuania is celebrated on the 6 of July. This day, in 1253, the first and only King of Lithuania, Mindaugas (pol. Mendog; bel. Mindoŭh/Міндоўг), was crowned. After the adoption of Christianity and coronation of the Christian king, medieval Lithuania became a Catholic Kingdom for a while. This occasion was a huge step towards international recognition of Lithuania in Europe. Thereafter, the Diocese of Lithuania was established by the papal decree, thus concurrently recognizing the state of Lithuania.

Little is known of Mindaugas’ origins, early life, or rise to power. The first time he is mentioned in a 1219 treaty as an elder duke of Lithuanians. The Bychowiec Chronicles, dating from the 16th and 17th centuries, mention legend that Mindaugas is offspring the Palemonids, a noble family said to have originated within the Roman Empire. His father is mentioned in the Livonian Rhymed Chronicle as a powerful duke (ein kunic grôß), Ryngold. The Livonian Rhymed Chronicle describes Mindaugas as the ruler of all Lithuania in 1236. During the following decades, Mindaugas strengthened and established his power in various Baltic and Slavic lands. 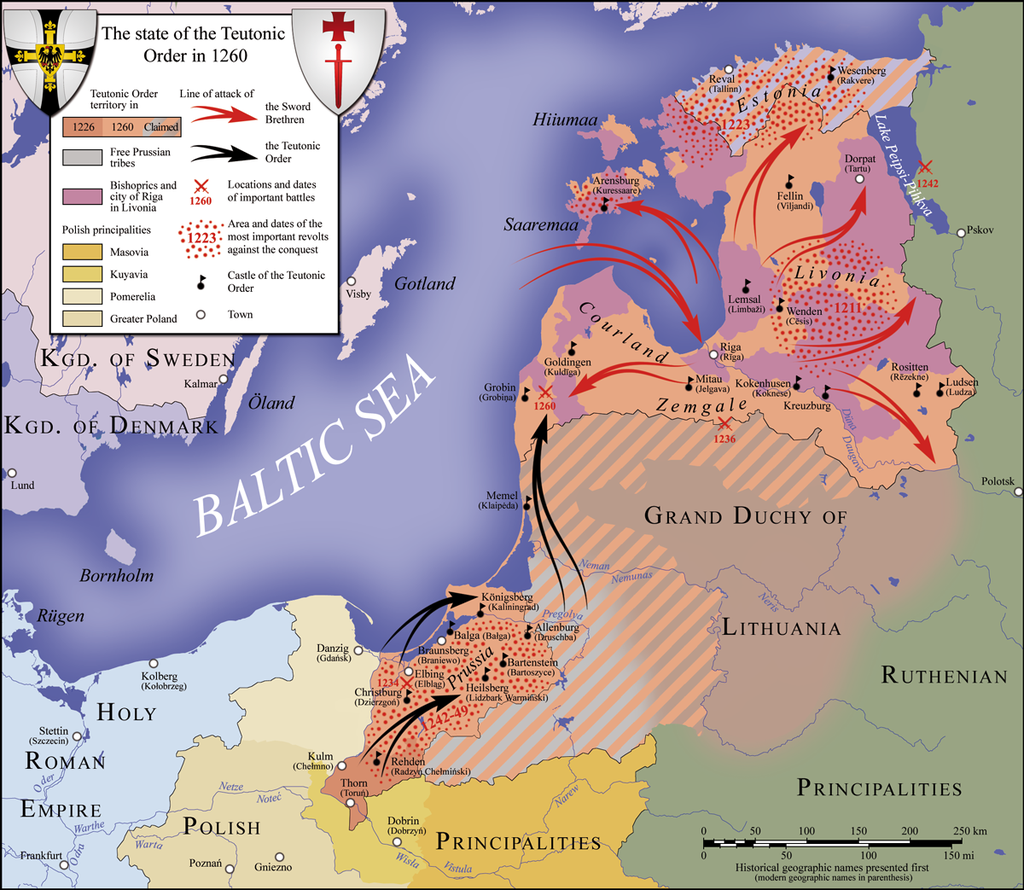 Western merchants and armed missionaries began seeking control of Baltic region during all the 12th century. They have founded the city of Riga in Latvia in 1201. Soon, armed Christian orders were established and started to pose a serious threat to all neighbor countries. Lithuanians have defeated Livonian knights in the Battle of Saule (near Šiauliai) and temporarily stabilized the northern front,  but the Christian orders continued to make gains along the Baltic coast, founding the city of Memel (Klaipėda). Constrained in the north and west Mindaugas continued his expansion in the East. Soon he have established his rule over Black Rus – Naugardukas (Navahrudak), Gardinas (Hrodna), Vilkaviškis (Vaŭkavysk) and the Principality of Polatsk. The interesting fact is that there is no information about any battles for those cities.

In spite of the international the success, Mindaugas had many opponents in his lands. Lithuanian dukes Tautvilas, Edivydas, and Vykintas formed a powerful coalition in opposition to Mindaugas, along with the Samogitians of western Lithuania, the Livonian Order, and Ukranian dukes Daniel of Galicia and Vasilko of Volhynia. During the war, the princes of Galicia and Volhynia managed to gain control over Black Rus. Tautvilas strengthened his position by traveling to Riga and accepting baptism by the Catholic Archbishop. The Livoninan Order, in turn, organized a major raid into the lands of Mindaugas’ and into those parts of Samogitia that still supported him. Attacked from the north and south and facing the possibility of unrest elsewhere, Mindaugas was placed in an extremely difficult position, but managed to use the conflicts between the Livonian Order and the Archbishop of Riga to further his own interests. He succeeded in bribing Master of Livonian Order, Andreas von Stierland, by sending him “many gifts”. In 1246 by Chronic of Gustynia Mindaugas was baptized by the Orthodox church in Navahrudak, but in 1251 he agreed to receive catholic baptism to have support from Livonian knights. 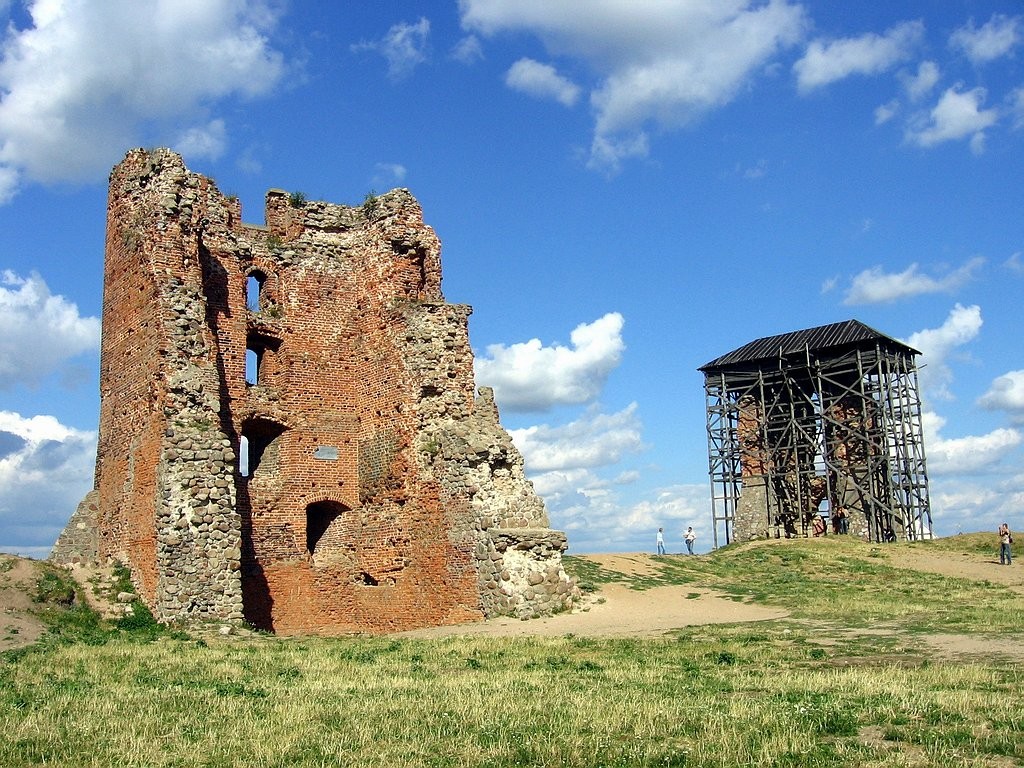 The ruins of Naugardukas (Navahrudak) Castle

The Pope Innocent IV welcomed a Christian Lithuania as a bulwark against Mongol threats. On 17 July 1251, he have signed two crucial papal bulls. One ordered the Bishop of Culm to crown Mindaugas as King of Lithuania, appoint a bishop for Lithuania, and build a cathedral. The other bull specified that the new bishop was to be directly subordinate to the Holy See, rather than to the Archbishop of Riga. Soon, with a support of Christin allies, duke defeated the coalition of his enemies and regained all his lands. Mindaugas and his wife Morta were crowned during the summer of 1253. Bishop Henry Heidenreich of Culm presided over the ecclesiastical ceremonies and Andreas Stirland conferred the crown. Main riddle of this event is the location of the coronation, which remains unknown till now. 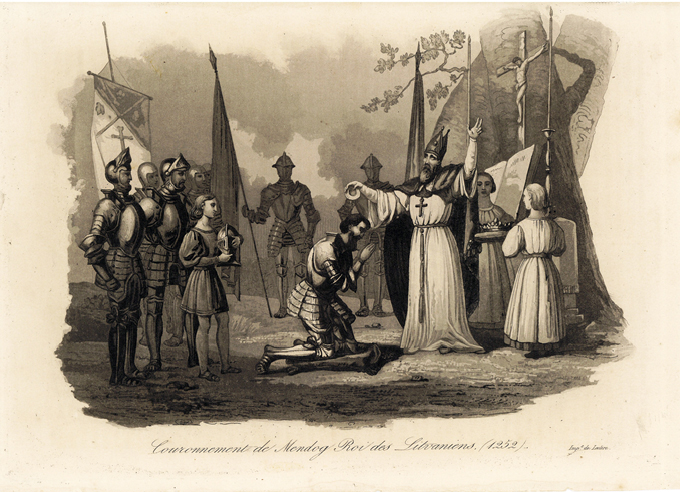 Relative peace and stability prevailed for some years. Mindaugas used this opportunity to concentrate on the expansion to the east, and to establish and organize state institutions. He strengthened his influence in Polatsk, a major center of commerce in the Daugava River basin, and in Pinsk. He also negotiated a peace with Galicia–Volhynia, and married his daughter to Svarn, the son of Daniel of Galicia. Lithuanian relationships with Western Europe and the Holy See were reinforced. In 1255, Mindaugas received permission from Pope Alexander IV to crown his son as King of Lithuania. A noble court, an administrative system, and a diplomatic service were initiated. Silver long coins, an index of statehood, were issued. 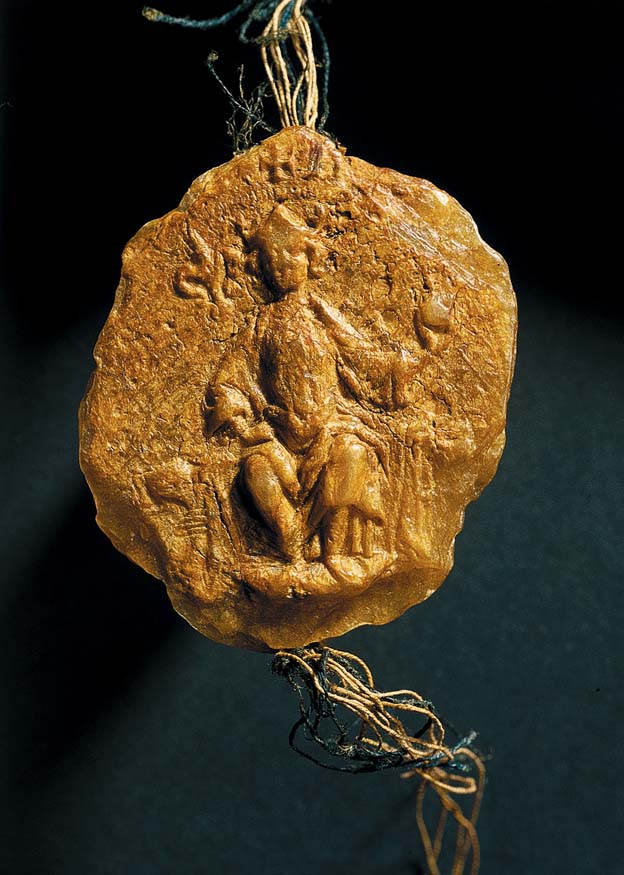 The Seal of Mindaugas

On the other hand the Livonian Order used their alliance with Mindaugas to gain control over Samogitian lands. In 1252 he approved the Order’s construction of Memel’s Castle (Klaipėda). Their governance, however, was seen as oppressive. Local merchants could only conduct transactions via Order-approved intermediaries; inheritance laws were changed; and the choices among marriage partners and residencies were restricted. Several pitched battles ensued. In 1259 the Order lost the Battle of Skuodas, and in 1260 it lost the Battle of Durbe. The first defeat encouraged a rebellion by the Semigalians, and the defeat at Durbe spurred the Prussians into the Great Prussian Rebellion, which lasted for 14 years. Encouraged by these developments and by his nephew, duke Treniota, Mindaugas broke peace with the Order. Treniota emerged as the leader of the Samogitian resistance; he led an army to Cēsis in Latvia, reaching the Estonian coast. His goal was to encourage all the conquered Baltic tribes to rise up against the Christian orders and unite under Lithuanian leadership. His personal influence grew while Mindaugas was concentrating on the establishing his rule in Slavic lands. Thus Treniota and Mindaugas began to pursue different priorities and became competitors.

The love story was beginning of the end of King. In the midst of these events Mindaugas’ wife Morta died, and he took her sister, duke’s Daumantas’ wife, as his own. In retaliation, Daumantas and Treniota assassinated Mindaugas and two of his sons in 1263. After Mindaugas’ death, Lithuania lapsed into internal disorder. Three of his successors—Treniota, his son-in-law Svarn, and his son Vaišelga (Voishelk) —were assassinated during the next seven years. Stability did not return until the reign of the Grand Duke Traidenis. The main miss of these events was the loss of King title by the Lithuanian dukes for all times. 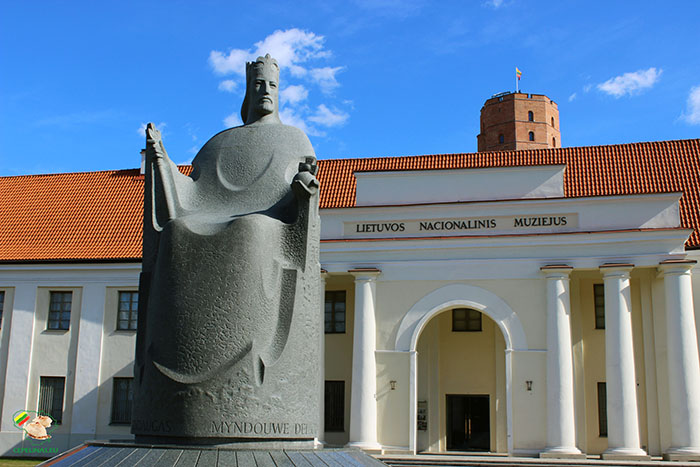 Nowadays Mindaugas is generally considered the founder of the Lithuanian state. Also, he is now credited with stopping the advance of the Tatars towards the Baltic Sea. The main King’s achievement was establishing international recognition of Lithuania, and turning it towards the Western civilization. In the 1990s the historian Edvardas Gudavičius published research supporting an exact coronation date – 6 July 1253. Therefore, this day is now an official national holiday, Statehood Day of Lithuania.