Saint Jonas’ Festival or Dew Holiday (Lit: Joninės, Rasos, Kupolė; Pol: Sobótki; Bel: Купальле) is a midsummer folk festival celebrated on June 23-24 all around Lithuania. In all Christian countries the evening of 23 June, St. John’s Eve, is the eve of celebration before the Feast Day of Saint John the Baptist. The Gospel of Luke states that John was born about six months before Jesus. Therefore, the feast of John the Baptist was fixed on 24 June, six months before Christmas Eve. In fact, this feast has deep pre-Christian, pagan, roots in Lithuania (as well as in many neighboring countries too). From the ancient times, people marked the time of the return of the sun, the shortest day and longest night. In olden times, it was called Rasos or Kupolė (the Feast of the Dews). When Christianity established in Lithuania, the name was changed to Feast of St. John, according to Christian traditions. 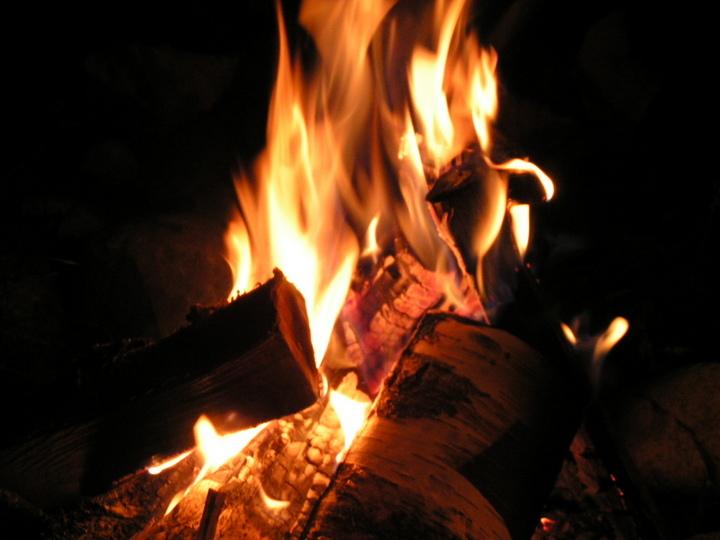 First, the Feast of the Dews is a holiday of the simple peasants, thus all main rituals of the longest day feast were closely related to agrarian ideas and notions. The main aim was to protect the harvest from natural calamities, evil souls, witches and midsummer visitors like draught, hail, downpours of rain and thunder. Special attention was paid to the dew because it revives plants at night. In addition, farmers paid special attention to water’s special powers in reviving soil and making it productive on this ritual day. At sunrise, peasants made their way around the fields, pulling a branch, which brushed the dew to fall into the soil and cause a good harvest. Maidens tried to get up before sunrise, collect the dew and wash their faces with it to make them bright and beautiful. They would also get up at night, go outside to wet their faces in the dew and returned to bed without wiping their faces dry. If that night they dreamt of a young man bringing them a towel, they hoped that he would be the one they would marry. Country sorcerers, during that night dragged a towel over dewy grasses, collected the dew, and watered the cows with it in order to increase their milk production. Also, different sortileges were carried out near and with water on this day. 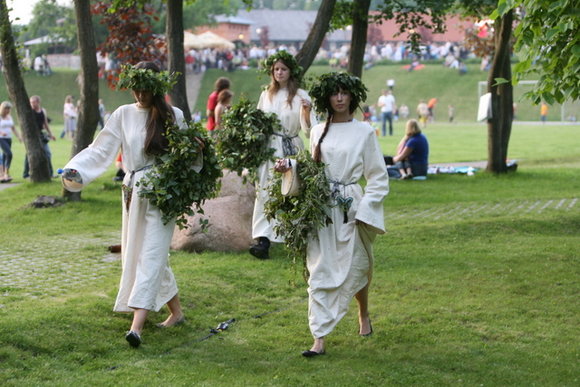 Folklore shows that “Kupolė” was considered the Goddess of plants, living in aromatic plants, blossoms or in buds in summer and in snowdrifts in winter. Flourishing plants, which therefore were also named Kupolės, were worshipped because it was believed that plants collected on the eve of the Feast of St. John possesses magic powers to heal, bring luck and foretell the future. This is an ancient ritual practiced mainly by women. Roses, common daisies, especially the herb of St. John and numerous grasses were some of the main plants collected at this time. The girls returned to the village after picking flowers and singing, wreathed the festival post, “Kupolė”, added colorful fluttering ribbons to it. This festival post was set at the far end of the village, near the grain fields. It had to be defended during two days and nights from young men who tried to steal it. After saving the post, the girls removed the decorative herbs and grasses and divided them amongst themselves because these herbs had special protective powers against evil spirits and illnesses. 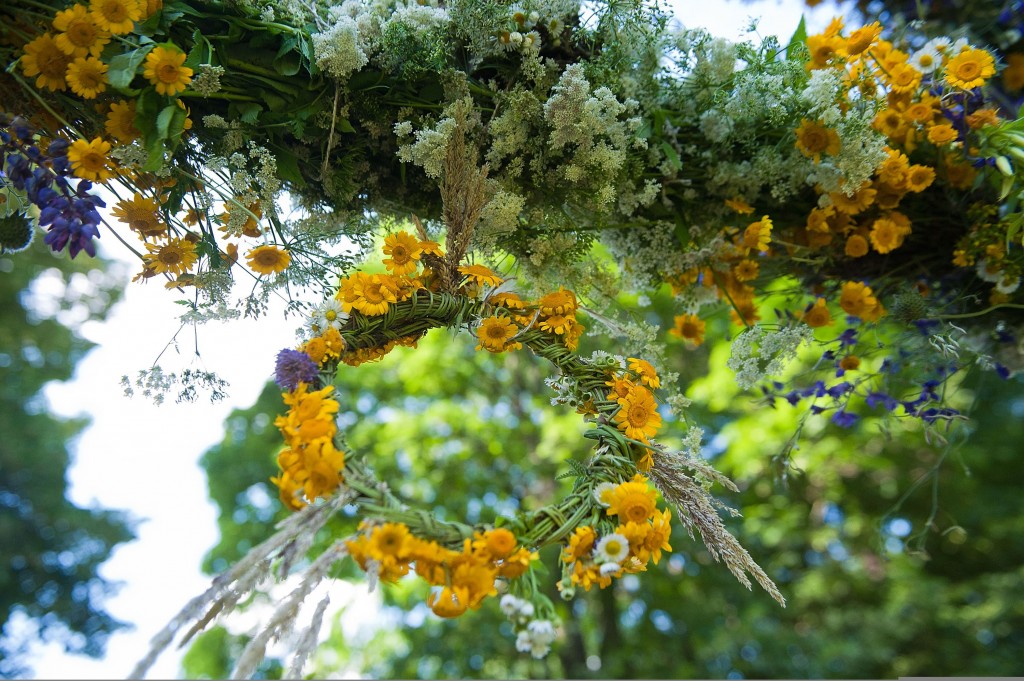 Another essential attribute of the Feast of the Dews was a wreath. Peasants believed that wreaths concentrate perpetual life’s forces and are symbols of immortality and life. There were many rites and sortileges associated with wreaths during this shortest summer night. It was considered that if the young woman would walk around three fields, gather bunches of nine flowers, twine a wreath and place it under her pillow, she will marry the man, who will come to take away the wreath in her dream. During another pagan tradition, at midnight, twelve wreaths were dropped into a river and observed if they were paired off. If no pairing off occurred, there was to be no marriage that year. Also, it was believed, that if a young man will catch the woman’s realized wreath, the maiden will be his. 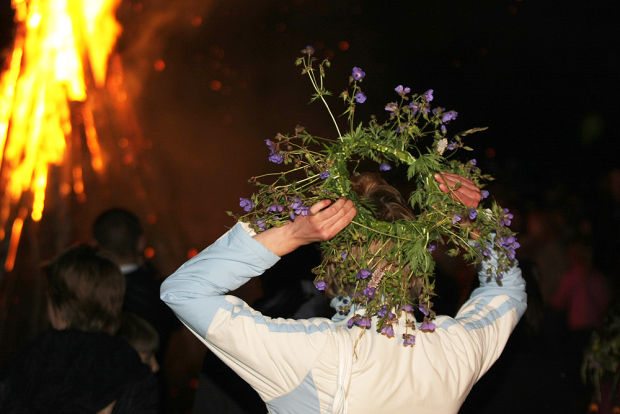 The rites of this night continued until sunrise around bonfires. The site selected for ritual bonfires was always in the most beautiful area, on hills, on river shores and near lakes. In some regions, bonfires were lit on future grain fields and under linden trees. Jumping over fires or around it had magic meaning. Ritual bonfires cleansed both physically and psychologically. Sick adults and children were brought to the ritual fires and were pulled through the fire, with the belief that they would be healed. Jumping over the fire was carried out with the belief of making better health, increasing body strength for hard summer labors and assuring better growth of grain and flax. 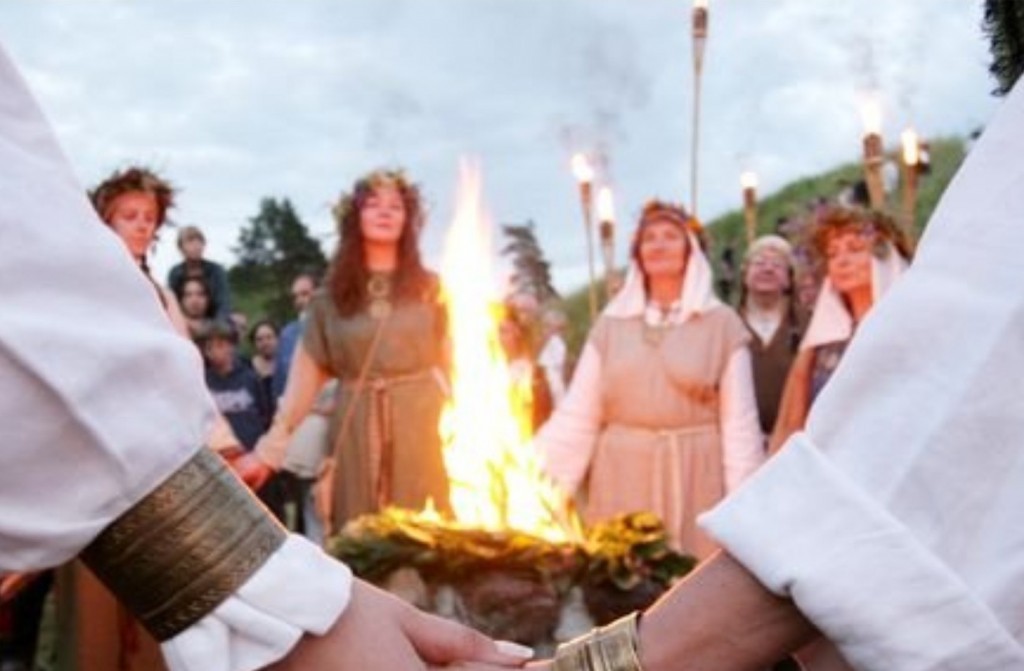 The most archaic tradition of this day is tall poles with wheels at their top, set on fire. The wheel symbolized the primitive farmers’ attitudes to the sun or her travel cart. This tradition related to myths about the sun’s travels by cart or by boat. The tradition of boating on lakes and rivers in flower and boats decorated with wreath, in which a fire was lit, symbolized the floating sun and was widespread throughout Lithuania.

The feast of St. John is connected with summer weddings and their rituals, which were bound to affect family living and population increases. Should a pair become friends this night, there will definitely be a wedding. 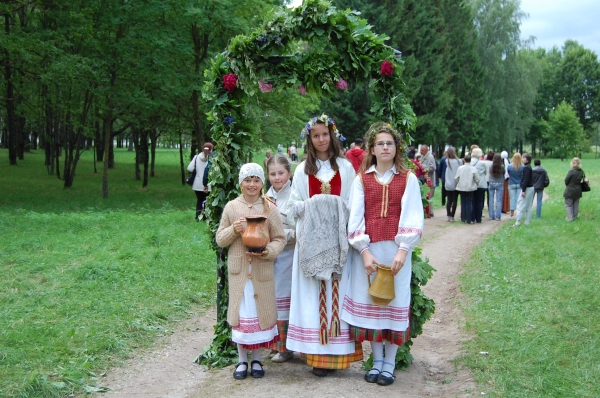 The miraculous flowering of the fern was the most fabulous event that believed is happening during the night of the Feast of St. John. According to the pagan myth, this flower blooms for a very short time on the eve of the Summer solstice. The main sense of this legend is that the flower brings fortune to the person who finds it.

Nowadays “Joninės” (24 of June) is an official holiday in Lithuania. Many folk feasts are taking place all over the country this day. During such events, people try to restore nice ancient traditions and to feel like their ancestry. And who knows, maybe someone would finally find the bloom of the fern 🙂